Have you ever wondered what would happen if one life was spared along history’s timeline?

I asked myself this question during my typical daydreaming session as I glanced out my kitchen window on a misty autumn day. I dared to believe that a story might be told, without disturbing the facts, but weaving a conspiracy beneath the visible records that we learn in history class.
And for me, my heart and mind immediately went to the part of history that I love most–to a girl in the tower, a traitor queen, a pawn in a losing faction of Tudor England.
The Nine Days’ Queen has gone down in history as a woman who died for her faith.
For those of you who know little of this woman–let me briefly explain the historical facts: Lady Jane Grey was a Tudor relative and known as a zealous, intellectual reformer. In 1553, the Protestant king was on his deathbed and next in line was his Catholic sister, Mary I. In an effort to to keep the British throne Protestant, the Lord President of the King’s Council and Jane’s parents forced Jane to take the throne– a treasonous decision. Mary would not be slighted, and she reclaimed the throne after a mere nine days.

Although the Queen offered Jane reprieve for her treason by giving her a chance to convert to Catholicism, Jane refused due to her fervent faith–or so the history books state.

What if Jane’s death wasn’t really hers at all? 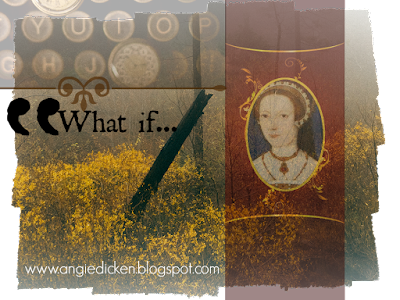 Would anything in history shift because of Jane’s conversion to Catholicism? Besides her name disappearing from Fox’s Book of Martyrs, what else would change?

But history would hinge more on the simple conversion and life lived out by a traitor cousin to the throne. The pivotal plot point would be wrapped up in a different question, Why?

WHY would a zealous Protestant young teen like Lady Jane Grey Dudley, choose to betray her faith and convert to Catholicism under the pressure of the woman now known as Bloody Mary? Knowing the high stakes during the Protestant Reformation, and the devotion Jane Grey had to her beliefs, something huge would have to make her waver at Mary’s offer. Why would this happen?

This is the question that launched in my mind a new story bursting to be told. And it’s one that hardly shifts the current timeline, but flips over the recorded Tudor history as if it were a tapestry, revealing a web of threads, knots, and snags yet to be discovered–and an underground legacy that reaches well beyond the Tudor bloodline.

If Lady Jane didn’t die so young, what unexpected legacy might she have left to us that changes nothing in the history books of today–but MUST happen for history to remain the same?

It is exciting to have written this story and see it unfold. I am currently seeking publication so you might know the rest of the story. Until then, join me here for Fictitious Friday on October 2nd, to get a snippet more of intrigue in this upside down timeline of Tudor England

**Fictitious Fridays are a chance to enter a Giveaway for a Starbucks card, as well as a novel about Lady Jane by Susan Meissner, Lady In Waiting. Stop by!**